He was born with an axe in his fur!

Wait, since Thell's gonna be freeing up blog names when 1.0 hits, that means the gamecube blog name will be free :eyes_emoji:

#i will be mighty tempted #oh man #text posts #mathematical

A Big World Out There

[I had said it over on my main blog here that I've been struggling a lot with backgrounds as of late in my Minecraft art. I had seen an old friend of mine do this, but I've decided to use Minecraft screenshots I take as backgrounds! :D

Here's something I did of Celina, Steve, and Brine as a test for it!

I wonder what Celina's talking about? :0c]

Here's what I did after I got a couple of replies to my musing earlier! I think it actually looks really nice!

i've never actually drawn a toku character before... WELL in full suit anyway.... im dying... BUT I MUST DRAW FUNNY EPIC EVIL MAN... i love him

Oh, to be trans and both wish and not wish to undergo surgery...

#like yes i want these removed. no i don't want to have surgery. #text posts #mathematical #surgery mention #medical mention

I'll be honest: I'm not much of a cheese connoisseur. I only really have cheese when it's with some other food item (like on sandwiches or what-have-you). I haven't really dived into the world of cheese, so who knows?

I usually get pepperjack on my sandwiches, though.

I'm gonna be doing some studying, which means that I'll get bored, so if y'all wanna send asks or whatever, I'll answer them as I go.

Holy moly, Math, that looks awesome! I love your use of the purple blocks! It really gives it an End feel! How long did all that take you? :0c

It's hard to tell how long it took. Really, what took the longest was clearing the mountain, since my closest stronghold ended up in an Extreme Hills biome. (I have... multiple double chests filled with stone and cobble now.)

The first post I made about the build was apparently 25 days ago, but of course I wasn't working on this all 25 days. Still, 25 days is my best estimate for how long it took.

Enjoy my shoddy video-taking! I'd say that, at least for now, this build is done.

Thanks to @beefox and @autiestella for the ideas I used in this build!

Not exactly done yet, but getting close...

The idea of this build is to make it seem like the End is leaking through the portal. Once 1.17 hits (and if I decide to keep the world), I'll most likely go back and add the skulk things to this build.

[Pic ID: Four screenshots of a Minecraft build. A conical hole has been eroded away, leaving bits of endstone and purple and black residue (purple and black concrete) in its wake. The further down into the hole one goes, the frequency of the endstone and residue increases, until one reaches the End portal at the end of it. The black and purple residue surrounds the portal, and appears as if it originates from the portal. End ID.]

Help me save for a safe place to live!
Subscribe to me! | Buy me a coffee | I have merch!
Please buy my books! 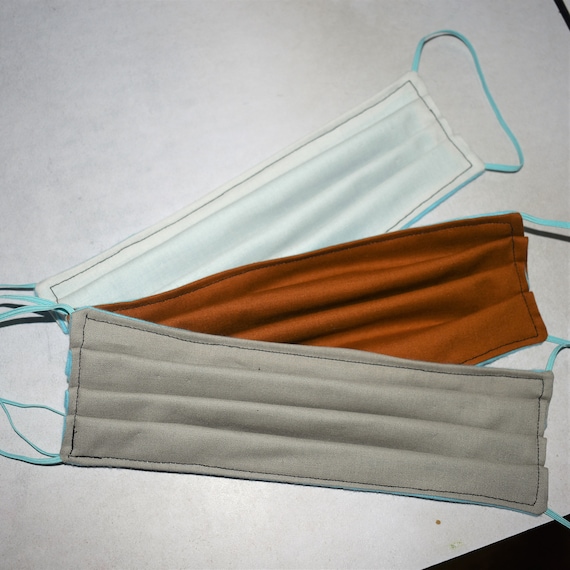 These reusable cloth face masks are made with 100 percent cotton -- solid or printed fabric on the outside, soft and comfortable flannel on the inside. They come in packs of 10, a random assortment of solids and/or print fabric with elastic ear loops or fabric ties. Fabric ties are made with the

Since coronavirus seems to be escalating again in many areas, and individual cloth masks and boxes of disposable masks are all so expensive, I'm selling resuable cloth facemasks again! Pack of 10 for 20 dollars, free shipping.

I got some from you back when the pandemic started and you were shipping them out to people who didn't have masks! The quality is fantastic and they're comfortable and with the two colors it's easy to remember which is front/back!

I don't think I ever posted this here, but I decided to make a new plushie to keep Brine company about two weeks ago. She's based off of my character, Daisy, who's basically mine and my fiancee's daughter. I made her because she and Brine mean a lot to me and I love them both dearly.

She came out so good, I love her and Brine so much. I cry when I hold them sometimes because of how much I love them!!!!

The kinda anti-union line Toadette gives you in Super Mario Maker 2 is already weird, but it's also weirder when you consider that she says this to Mario.

Mario, who has been a construction worker, demolitionist, factory worker, plumber, doctor, etc. Mario is likely in one if not multiple unions.

Maybe I'm biased, but I'm not a fan of streaming services or what-have-you dumping an entire season of a show at one time. I feel like I can't really pace myself so well, so I end up with an entire season's worth of information to soak in rather than just one episode, so I end up feeling like it was way more rushed or just not as enjoyable.

The obvious answer is to, you know, just pace myself better, but I also enjoy looking up fan content as well––it helps keep my interest up. But of course, when an entire season's uploaded, stumbling on spoilers would just be inevitable.

@autiestella, that's understandable. I also tend to forget stuff if it takes a while for a new episode to release... Really, the ideal scenario would be maybe an episode released weekly? Just enough to fully absorb one episode and talk about it/whatever and have that suspense of "what's gonna happen?" without too much wait.

Like, for instance, since Steven Universe was a TV program, it released episodes rather than full seasons. But the pacing for when episodes would release was just all over the place and would sometimes take forever, so I'd forget stuff and just lose interest even though I really liked the show.

It's just a really hard and subjective balance to maintain...

Maybe I'm biased, but I'm not a fan of streaming services or what-have-you dumping an entire season of a show at one time. I feel like I can't really pace myself so well, so I end up with an entire season's worth of information to soak in rather than just one episode, so I end up feeling like it was way more rushed or just not as enjoyable.

The obvious answer is to, you know, just pace myself better, but I also enjoy looking up fan content as well––it helps keep my interest up. But of course, when an entire season's uploaded, stumbling on spoilers would just be inevitable.

I have finally cleared all of the mountain... it took... so long...

Now to get to the actual build.

[Pic ID: A screenshot of Minecraft. Red concrete powder outlines a hole in the ground. A stone mountain surrounds the hole. End ID.]

everybody's coming, leave your gender at the door

The CW just kept on digging this hole of theirs but completely forgot they were slinging the dirt up top for us to see. Oh my god.

I am fucking LOSING it over the latest Supernatural drama. They really recorded a whole ass mutual confession scene...cut it out in the English version...released it in the Spanish version...aND THOUGHT WE WOULDN'T FIND OUT?!?!?! WHAT?!?!

DEAN SAID... 'yo a ti' AND I AM GOING TO LOSE MY FUCKING MIND

TW for cat death and asking for money


So. One of the kittens got feline infectious peritonitis and is actively dying. If anyone could help us with euthenasia and cremation costs along with bills it'd be grately appreciated.

My cashapp is $neurobiverse and here's my paypal link

Update: the roommate paid for it on her credit card, but would eventually like the money back so we still need help if anyone is able but we were able to go through with everything if anyone's wondering thanks to their super nice and understanding roommate.

Kipo and the Age of Wonderbeasts spoilers for Season 3. I ain't vague or nothing, I literally say straight up spoilers.

Edit: Okay, yeah, I admit I got vaccine and cure mixed up in my head, but the vaccine thing did seem weirdly dropped. Song and Lio got the supplies and then we never heard a lick of the vaccine again, if I'm correct.